My biggest chore of the day was getting all the laundry done - took a while, but all six loads got done, folded and put away.  I did a few other routine things in between.

Around 4:30 or so, Lisa and David dropped the kids off.  They are taking an anniversary weekend to Asheville and we get to keep the young'uns!  They were both so excited.  We decided to play outside in the front yard, since it was such a beautiful day.  Just about the time we headed out, Grandpa got home, so they had a ball playing with him.  They talked him into raking up a big pile of leaves so they could jump in them.  They had a lot of fun. 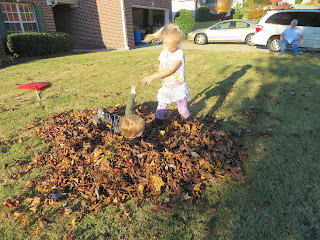 We finally came in and had some mac & cheese for dinner.  The rest of the evening was spent playing cars, pots and pan drums, and all sorts of other very fun and noisy things. 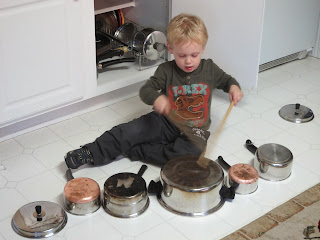 Brooks was to bed shortly after 8, but Ashby stayed up and played a little longer.  She couldn't decide where to sleep.  She decided she didn't want to sleep in the big bed in the same room with Brooks, so she was planning on sleeping in the bed upstairs.  That was OK, until she was ready to sleep.  Then she came down and wanted to sleep with us.  By that time, I was heading to bed, too, so she climbed in with me and we read some more books.  Then she cuddled up and went to sleep.  She ended up sleeping the whole night with us, clinging like a little vine to me.  Precious!

So day one has gone well.  Here's hoping the rest of the weekend is just as successful.
Posted by Grandma Cantrell at 7:15 AM