Ok, so I had my 62nd birthday in January. Doesn't seem like that big a deal, but I think my brain has forgotten to come along for the ride! I have started to do posts several times, got distracted, and then completely forgot to go back and finish! It probably isn't really that big a deal since my life is pretty boring in the retelling of it, but even so -- don't you think I could remember to finish what I started? Well, let's see what happens this time................. 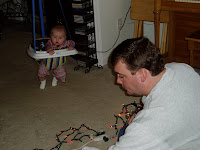 r, we were excited for Billy to come down from Iowa and spend a weekend here. His primary purpose was to get a chance to see Ashby, so he spent quite a bit of time over with Lisa and David and Ashby. The two of them seemed to get along quite well. She even let him hold her, which she doesn't always do. On Saturday, every one came over to our house and we put up the Christmas tree. It had been a long time since Billy had been around for the tree trimming and we had a lot of fun. Here is a picture of Ashby watching Billy get the strings of lights ready. She seems quite interested in what he is doing! 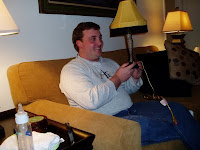 We had all agreed that we wouldn't do presents this year since none of them would be home for Christmas, but Lisa couldn't resist just one gift for her brother. Yes, that is the famous "leg lamp" from The Christmas Story - a minature version. She said everyone bachelor needed one!

Lisa, David and Ashby went to Colorado for Christmas, so we had our Christmas with them the Sunday before. As you can see, Ashby may not understand what Christmas is all about, but she still likes the presents - or at least the colorful paper. 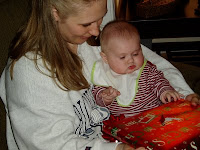 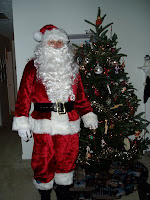 Christmas Eve was the traditional get-together with Bill's family, which always includes homemade tacos, gift exchange and a gag gift exchange which seems to get sillier every year. Christmas Day was very quiet, as we didn't have any children getting us up early. We slept in and had a lazy day. Well, let me rephrase that - I slept in while Bill went out at 6 am to play Santa for a family we know. This is his second year as Santa Claus. I got up long enough to take the picture. Later in the day, we went to the movies and had popcorn for our Christmas dinner. It was actually a pretty nice day - although it would have been better with the kids. Maybe next year.
I would write about New Year's Eve, but there isn't much to say. We did a toast with sparkling grape juice about 9:00 in case we were sleeping at midnight. I woke up about ten minutes before, went out to check on Bill, sleeping in the recliner. When I changed the channel to watch the ball drop, he woke up. So we watched the ball, said "Happy New Year", kissed, and went back to bed. 2009 made it in without our partying!
So that was our holiday. It doesn't sound like much in retelling it, but the truth is, it was very nice. We enjoyed hearing from lots of friends, even though we didn't get any cards sent out. We had some great moments with family. Most important, we were able to spend some time with our children and families, even if it wasn't on Christmas Day. We can count our many blessings and we know that we are lucky!


Posted by Grandma Cantrell at 2:35 PM No comments: