Easter Sunday 2010
We had a great Easter Sunday this year. Billy had spent the last three months in Key West, Florida, and was on his way back home. He spent a few days with us, which happened to be Easter weekend. It was also General Conference weekend, so no regular church meetings were held. The "Easter" meetings are to be held next Sunday. Even so, we took a few minutes to reflect on the Savior and His great sacrifice, the Atonement, and the resurrection.
Lisa, David and Ashby came on over mid-morning. We had a little Easter basket for Ashby with some stickers and bubbles. Lisa brought plastic eggs for an Easter egg hung in the backyard. At 20 months, Ashby didn't need to have the eggs hidden, but she had a great time picking them up. 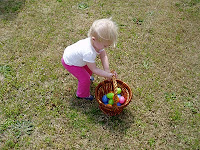 Billy bought an old boat from Greg, his cousin. It was a boat that originally belonged to Joyce and Leroy, who later gave it to us. We later gave it to Greg. It had been around a little more and ended up back with Greg. So, Billy took it back to Iowa with him. He will store it at Grandpa's airport, which is really close to the Coralville Reservoir. He was working on getting the trailer lights working properly, so we were out in the front lawn. Ashby loves running up and down the sidewalk. At one point, she stopped and picked the "little purple pansies" that are in the front yard. 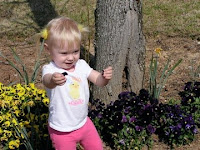 Billy had brought some king mackeral that he had caught. He grilled that, along with some veggies, and we added a potato salad and other trimmings for a great meal.
Later, we colored eggs. We had quite a set-up on the dining room table. That lovely tablecloth is actually one of Bill's dropcloths, so we didn't have to worry about dying anything that shouldn't be dyed! 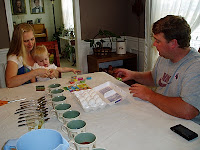 Ashby didn't quite get the egg coloring thing. Her one attempt at dropping an egg into the cup of dye resulted in quite a splash when she tossed it like a baseball! But, she really got into putting stickers on the eggs after they dried. 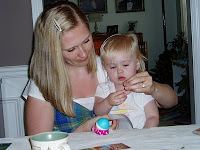 It turned out to be a great family day, especially since Billy was there, too.

Posted by Grandma Cantrell at 6:40 AM No comments: