A Month of Vacations

July was a busy and enjoyable month - a month of vacations!

July 10th, we headed down to St. Augustine, Florida, for our annual family get together there. As usual, we stayed at Ocean Gallery. It was a relatively small group this year. Besides Bill and I, Lisa, David, Ashby and David's mother Vanett had their own condo for the first week. Joyce, Leroy, Greg, Judy and the girls stayed in a third condo. Julie and Michael came down the first of the week and Michael stayed with the Stickels and Julie stayed with us. Our condo was really nice - one bedroom downstairs and an enclosed loft and bathroom upstairs. The second week, Julie moved into her own condo with Michael and Chris, who came down after completing his class. Lisa and Ashby moved over with us, since David and his mother had to go back. Hazel, John, and Joy were at their beach house. When we all got together, it was still a nice group.

I don't vary my routine too much from year to year. Some mornings I would go out to the beach for a while. I love watching the sunrise, or if I am a little late, the beach is still beautiful that time of morning. I had one time when I was sitting up quite close to the water, and I looked both directions and didn't see another person. Fantastic! Of course, there were plenty of walkers further back on the beach, but they were behind me and didn't count!

Then I would head back to the condo and get ready for the pool. We were closest to the club pool, which has about a third of the pool inside. I picked out my favorite spot, by a table with an umbrella, and got all set (a lounge chair with pad and terry cloth cover, my drink and snacks arranged, my book out, towel ready.) Then I would hit the hot tub for a few minutes and finally cool off in the pool for a while. When the sun was too hot, I would swim inside the building. Finally, I would get settled in my chair in the shade, read my book, and thoroughly enjoy the day!

Mid afternoon, I headed back to the condo for lunch, spent some time on my computer checking emails, doing genealogy, or whatever. Some afternoons, a nap was nice. All in all, a wonderful way to spend two weeks!

Lisa and I did go out to lunch and then into the outlet mall one afternoon for a little while. We bought a bunch of baby stuff and some things for Ashby at the Carter's Outlet. Plus, I picked up a couple of things for me. I think that was the only day that I varied my schedule! There is so much to see and do in St. Augustine and it has been a few years since I did the sightseeing thing, but I just can't tear myself away from the pool!

Evenings were a little more varied, but not by much! We went out to eat a few times, but most evenings the whole group got together. We did the dinner one night the first week and had taco salad. Everyone else took a turn, as well, so we had some great meals and fun times together. Most evenings ended at the pool for a little while. 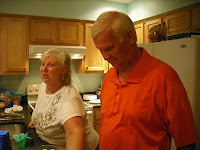 Dinner at the Cantrell Condo
On Joyce and Hazel's birthday, we had a party at a little Cuban restaurant in town, where Stephanie works. They are generally closed in the evenings, but they opened for our private party and provided the food. It was great! We had a lot of fun, even a little dancing to the Cuban beat. 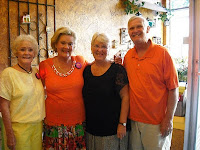 Joyce, Hazel, Martha and Bill at the Cuban Restaurant
Ashby is two now and she thoroughly loved every minute of the two weeks. Whether at the beach or at the pool, she kept busy. Vanett bought her a little outfit with a tube around the middle and she was so excited to be able to propel herself through the water and not sink! At the beach, she played in the sand and in the water, rarely sitting still.

Ashby Playing in the Ocean 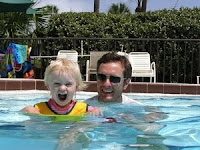 Ashby in the pool with David

On Thursday evening of the second week, I had to leave. I flew up to Iowa for my 45th class reunion. I got into Moline about 11:30 that night and my friend Paula picked me up. The next morning, we drove up to Iowa, going quite a bit out of the way to pick up Barb Tope Earl, who had a car problem. It was great to get some time with Barb. Our families were the closest of friends all the while I was growing up, but I hadn't talked to Barb in many years and it was fun to get all caught up. It is wonderful that friendships from the past remain so strong.


Friday evening, there was a pizza party at Red Heart Pizza in downtown West Union. We had maybe 20 or 25 people show for that. Then Saturday morning, we met Peggy, Judson, and a few others for breakfast at the Uptown Cafe. Saturday afternoon, Paula took time to make an appearance at a family reunion for Larry's family, and I stayed at the motel and read and took a short nap.

The reunion was Saturday night at Country Hills in West Union. After an hour for socializing, we had a great dinner, followed by the town hall meeting. There was a slide show, some comments from Dennis Russler, the chairman of the committee, and James Guyer, the class president. Then every class member took a minute to catch everyone up. The last couple of hours were spent socializing. It was really a great evening. About 55 of the classmates were there, about 80 in attendance all together. That is great for a class of about 110 - 50% attendance!

Sunday morning, we met Peggy and her sisters at Hardy's for breakfast and finally headed back. We dropped Barb off in Grundy Center and then Paula dropped me off at Billy's in Cedar Rapids. It was really a fun weekend. Paula, Jane, Barb, Marlene Suckow, and I are the committee for the 50th reunion.


I spent the rest of the week with Billy. We got down to see my dad three times during the week. He seems to be doing well. He mentioned that there is some carotid artery blockage on both sides and he refused to let the doctors do any stints. I tried to convince him that it was such a minor procedure that he should do it, but he says he is ready to go when the Lord wants to take him. At 82, he is still getting around really well. Rita looked good, too.


Billy and I were pretty low key. We went out to eat several times. He did some bike trips while I did genealogy on my computer. We also talked a lot. I enjoyed the time with him.

Saturday morning, he took me back to the airport in Moline and I got home that afternoon. It was great to see Bill. We went to the Macaroni Grille for dinner and David, Lisa, and Ashby joined us.

So, I was on vacation for three weeks of the month of July. And I loved it all!
PS - we thought we forgot the camera, because we couldn't find it when we got to the beach. Bill found it while cleaning out the car when getting ready to pack to head home. It had been under the front seat the whole time. Thanks to Julie and Lisa for what pictures I do have. I didn't get any at the reunion.
Posted by Grandma Cantrell at 4:32 AM No comments: