Another Birthday for Bill

Well, Bill made it through another birthday yesterday. Fortunately, this one was quiet and sensible, unlike his skydiving adventure last year. We were lazy in the morning, baked some cinnamon rolls, etc. He went to visit his sister Joyce for a while and talked to other people on the phone.

Later in the afternoon, Lisa, David and Ashby came over for dinner. Bill had requested homemade tacos, so that is what we had. We took a long time to eat - too much fun stuffing our faces, I guess!

He had requested no gifts, so Lisa and family just brought him a homemade birthday card. Lisa had made the card and then let Ashby use a crayon to color it. It was the first time she actually colored instead of trying to eat the crayons. They took a video of her working on the card and it was hilarious.

I just got him a gadget to use with the grill so the meat gets cooked just right - sort of like a meat thermometer with a remote that tells you when it is perfect. We have had a little problem with meat being slightly overcooked over the years, so this seemed interesting.

The rest of the day was just spent watching football, playing with Ashby, chatting with the kids, and being generally lazy. Turned out to be a good day.

Thank goodness he didn't skydive again. The bad news is that he mentioned that he was thinking it was time to try it again. I am trying to just ignore that comment!
Posted by Grandma Cantrell at 9:43 AM No comments:

I had a great trip!

I got back from Iowa yesterday. It was a great trip. I flew up on Wednesday, the 26th. The plane to Moline was not very full, so I had a whole row of seats to myself. Sure makes it comfy to travel when you can spread out like that.

I arrived around 11:15, got the car rental taken care of, and called my friend Paula, who lives in Davenport. She came to the airport and I followed her to Bishop's for lunch. She is dealing with her husband having been recently diagnosed with stage 4 colon cancer, so it is a very difficult time for her. I wish I was closer so I could offer more help. We had a great talk, though. She and I have been best friends since we were about 5 years old.

I then drove on over to my dad's airport near North Liberty and spent the rest of the afternoon with him. They always have a steak fry and aeroclub board meeting on Wednesday, so I was there for that. Billy came down in the evening, too. After the meeting (about 10 minutes of official business and lots of time telling stories), we (Billy, my dad, and his friend Rita) stopped over to see my brother at his "Garage Mahal." He built a huge garage a few years ago - big enough for three vehicles, plus a big bar, bathroom, big TV, the works. I enjoyed chatting with him and his wife and playing with the dogs. Then Billy and I headed up to his condo in Cedar Rapids. Billy hadn't eaten, so we ran out to Olive Garden so he could get dinner and I had an appetizer.

Thursday we went out to Amana's for breakfast. They do a family style, all-you-can-eat, breakfast with eggs, bacon, sausages, corn pancakes (the best you have ever put in your mouth!), fruit, juice, and whatever else you can imagine. It isn't cheap, but it is definitely worth it! It was a rainy day, so we spent the rest of the day at his condo, just talking. Later we went out for dinner (we didn't need lunch after that breakfast!) and then back for a lazy evening. I tried my hand at the game where you play the guitar, but I was so bad that I got booed off the stage every time.

Friday Lisa flew in to Moline, so we went over there to pick her and Ashby up. Ashby fell asleep almost the minute we got in the car, so we went back to Billy's for a while. Later we headed down to the airport so Ashby could meet her great-grandpa Nelson. We all went out to dinner at Red Lobster. Mighty good!

Saturday we went spent the afternoon at Dad's and then went out to dinner again to a Mexican place in North Liberty. I was impressed that it was so good - actually better than most of the places here in Georgia. 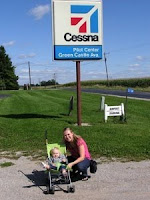 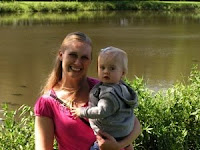 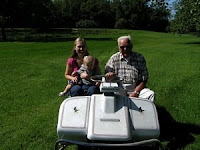 Sunday we were so lazy that we all slept in and didn't even get around to much until afternoon. We took Ashby to the Iowa Children's Museum in Coralville and she had the best time. I thought the cutest was in the little grocery store, where she pushed around the shopping cart which was just her size and looked at all the "food" on the shelves, throwing some in her cart. She went round and round that place for the longest time. She also enjoyed the farm, where she planted and harvested all sorts of vegetables. Most of all, she loved the slide. Needless to say, she was worn out when we finished there, so it was back to Billy's. That night we stopped and picked up some fresh picked sweet corn, bought some Iowa chops and potatoes, and had a great meal in. Iowa sweet corn is about the best, especially when it is that fresh! 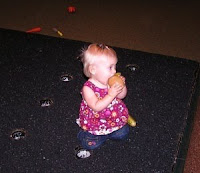 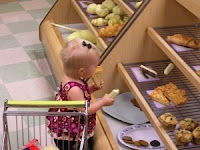 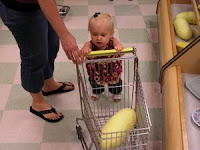 Monday we went over to the Amana's again. We had planned to go for breakfast, but we were too slow, so we had lunch and shopped in some of the little shops for a while. Then we headed back over to the airport to see Great-grandpa one more time. That night we got more corn and fixed chicken, rice and sweet corn. 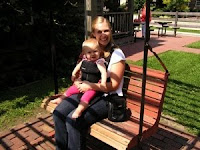 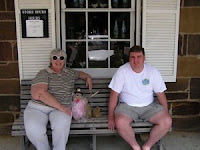 Tuesday we had to get up and take off fairly early so we could get to Moline in time for the 11:45 flight. The flight back was also not crowded. In fact, when we checked in the night before, we picked seats in the back of the plane where it looked pretty empty. Turned out it really was empty. We had the whole back third or more of the plane to ourselves. Lisa and I both sat in aisle seats across from each other and Ashby had two seats to play in. That is great for travel, but it worries me as far as AirTran being able to keep these cheap flights to Moline.

Ashby was so good the whole time. Her Uncle Billy couldn't get over how laid back she was, hardly ever crying or fussing. She is so entertaining that a lot of our time was just spent watching her. How fun!

It was good to see Dad and that he seems to be doing well. I also enjoyed spending some time with Billy. We don't get to see him much since he moved up there. Hopefully, he will be coming down here before the end of the year.


(Pictures from Lisa)
Posted by Grandma Cantrell at 1:36 PM 1 comment: