We had another chance to keep Ashby for the night this past weekend. It was David's birthday and Lisa had planned a surprise on Friday night. She picked him up at work, and they stayed at the Hilton Suites near Perimeter Mall. She had gotten a great deal, since most of their business is commercial and they sell the rooms cheap on the weekends. They also ate at Maggiano's, which is their favorite restaurant.

So that meant Grandma got to take care of the baby! She is getting so big, almost 7 months old, and is so much fun. Bill was working out of town so didn't get home until after she had gone to sleep for the night. That meant I didn't even have to share her! We ate sweet potatoes, played with toys, jumped in the jumpster, watched Baby Einstein, read books, got lots of tickles, and just laughed ourselves crazy.

She had a little trouble getting to sleep since she was not at home and she finally figured out that Mommy wasn't coming back. But she was asleep by 9:45 and we didn't hear another sound until 8:00 the next morning.

Unfortunately, she had to leave in the early afternoon when Mommy and Daddy returned. She was so excited to see them. 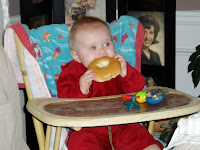 They were back over on Sunday to celebrate his actual birthday (the 22nd). We had a home-made taco dinner and some Bruster's ice cream cake. Ashby sat in the old high chair at the table with us and chewed on her first bagel.

I have decided that I have lived my whole life for this moment!
Posted by Grandma Cantrell at 6:39 PM 2 comments: 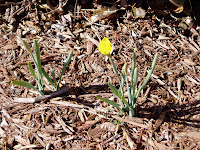 We have been having some gorgeous weather - even for Georgia! It seems that the daffodils are thinking spring has arrived as well. They have been up through the ground for a couple of weeks and yesterday the first blossom popped out. 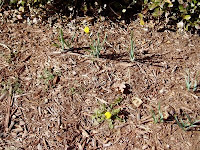 Of course, we haven't been out working in the yard because we have been busy with so many other things. So, we should have expected that the very same day, the first dandelion blossom would appear, right next to the daffodil.
Even so, we will take spring in all its forms!

Posted by Grandma Cantrell at 8:41 AM No comments:

Meeting with the Mayor

One of the fun parts of my calling in public affairs is getting to meet with some of the elected officials in the stake. I had that opportunity again today. Dacula is a small town of perhaps 4000 people. We live in the county just outside of Dacula and our ward is named the Dacula Ward.

Elder Gonzalez, of the Presidency of the Seventy, is over the North America Southeast Area of the church. He has put into motion a major day of service for all the states in the area (that is 10 states and about 94 stakes) to be held on April 25th. It is a priesthood event, supported by public affairs.

Anyway, in our stake, each unit is planning its own event. We are rather spread out and the bishops wanted to keep the service in their local areas. So today I accompanied the PA Specialist from Dacula Ward in meeting with the mayor about what service we could do for Dacula. It was a great meeting. He knew why we were coming so had done a little research and suggested several potential projects.

He seemed as excited as we were as we discussed potential ideas. We indicated that we wanted this to be a community event and to be able to partner with other churches or organizations. Mayor Wilbanks is a member of the Hebron Baptist Church and said he would like to talk to them about partnering with us. What is significant about that is that in the south, the Baptists do not particularly like the Mormons. In fact, Hebron, like many Baptist churches, has classes about the Mormons and how to avoid getting taken in by the missionaries.

We have had some interesting experiences. Like the time one of our members offered the use of the gym at the church for a youth basketball program, as they were struggling to find places to practice. Her offer was refused on the spot, because they would not let their children enter the building of a non-Christian sect. Another Baptist church, disinvited one of our ward choirs from participating in a community choir festival at Christmas, because they would not allow Mormons into their church where the performance was to be held.

I do not expect that Hebron will accept the offer, but it is good to know that it never occurred to the mayor that there would be a problem. This mayor is really a good old Southern boy - still goes by the name of Jimmy and has the real accent and everything. He grew up in Dacula, back in the days when what is now the center of town was his family's farm.

It turned out to be a nice visit and Emily and I are both excited.
Posted by Grandma Cantrell at 4:59 PM No comments:

Bill and I enjoyed a nice get-away weekend in Charleston, South Carolina, this past weekend. We were looking forward to a little time away and we also had an ulterior motive. We wanted to look for housing for a get-together with some friends this fall.

On Friday, we took off mid-morning. It is about a 5 1/2 or 6 hour drive from Atlanta, so we could take our time and enjoy the trip and still get there before dark. We stayed at a hotel in Mt. Pleasant, which is just across the bridge from Charleston. The bridge itself is worth a trip to see! It is what we call a "pretty bridge," because of the suspension cables that make the most beautiful silouette. There is a similar bridge in Jacksonville, FL.

Saturday and Sunday we just rode around, talking to real estate people and looking at possible places to stay. We wanted to get a feel for the area so we could decide what was the best area for a vacation week. We finally decided on Isle of Palms. Our favorite house is right on the beach and is beautiful. Hopefully, we will be able to work it out to get that one. Even so, we now know what we want and have a couple of good agents that can help us if we need it.

Other than that, we didn't do much. We enjoyed eating out, which we don't do too often, and relaxing in the hotel room was nice, too. We watched the SuperBowl - or Bill watched and I read.

Monday we headed back home, getting in by mid-afternoon. We didn't do any sightseeing, other than driving around to see what was there. But, we did pick up a ton of brochures to study between now and October. I loved our drive through downtown Charleston on Sunday afternoon. It is so cozy and historical. We are so excited to get the chance to visit the places we saw.