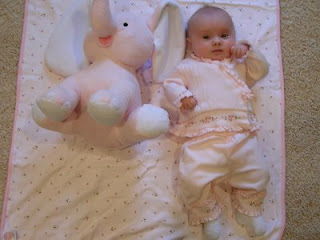 I don't mind telling you that this grandmother business is just about the best thing there is! Today was David and Lisa's third wedding anniversary, so they wanted to go out to dinner. Fortunately, they ask Grandma first to be babysitter.

Ashby and I had the best time. She cried when mom and dad left, but she was really tired. I let her cry herself to sleep and when she woke up later, she was ready to eat. She does enjoy eating! I was watching Law & Order at the time, and she was glued to the TV while she ate. So maybe she will be as big a fan as I am!!!

After eating, we had our play time. She is so happy and laughs and chatters. She has learned to grip her rattle and can really make it go. After about an hour, she was ready for another nap. I just laid her in her crib and in a few minutes, she was sound asleep.

Unfortunately, the parents returned before she woke up again. Oh, well. I will have another day!

We are so happy that they are nearby so we get the chance to babysit often. Ashby gets cuter everyday. You will have to go to their website to see pictures. They just posted her 3 month old picture with the elephant. http://web.me.com/dpulsipher
Posted by Grandma Cantrell at 5:52 PM No comments: 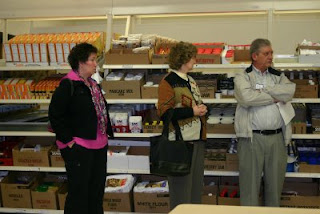 I had an interesting evening on Thursday. As Director of Public Affairs for the Lilburn Stake, I am involved with community events. My Community Relations Assistant, Briane Adams, has set up a partnership between the wards in our stake and the food banks in our area. The kick-off meeting was held Thursday at the Bishop's Storehouse in Tucker.

We had three of the food banks represented by five people. Suzy Bus, the director of the Gwinnett County Help-Line, was also there. She is the one who has been working with Briane to make the connections with the food banks. In addition, the bishops or counselors from the wards were in attendance to meet the food bank directors. John Hopkins, manager of the storehouse, and President Johnson of the stake presidency, also were there.

We started with an introductory meeting where Briane gave a short talk about the church and our welfare program. He introduced everyone and explained about the initial $500 food donation that would be made to each of the food banks. He also talked about our desires for this to be a successful, ongoing partnership.

John then talked a little more about the storehouse and how things are organized and run. He then led a tour of the facility. We started in the bishop's storehouse where the food bank people could see the kinds of commodities that are available. The drypack cannery was next and we talked a little about our food storage program.

What really caught their interest was the tour into the warehouse where all the foodstuffs for both the storehouse and the drypack are stored. They were amazed at the quantity of food stored. But, they were awestruck at the humanitarian supplies. The stacks of generators got the first comments. The cleaning kits, hygiene kits, tents, tarps, tools, etc., led to a very nice discussion about the things the church does in times of emergency.

One of the men said that he had come to the meeting with some hesitation, not knowing what he might be getting into with the LDS church, but he was blown away with what the church has been doing and with the incredible preparation that has been done. The same man shared later that the night before he had attended a bible study group and when he mentioned the meeting he was going to the next night, he got quite a few negative warnings. He was anxious for next week's bible study so he could set the record straight.

All of the food bank directors seemed excited about the prospect of working with the church members. The bishops that were there, but whose food banks could not attend, asked if they could bring those people for a private tour once they had established contact. Of course, John said they were welcome at any time. Later, John said that this was the first time he had ever been part of this kind of community meeting in the 12 years he has worked at the storehouse and he was so excited about the prospects. Hopefully, this will become an example of what other stakes in Atlanta can do.

We all left really excited about the positive feeling that we felt at the meeting. Hopefully, this will be the beginning of some great relationships. One of our goals is to build our involvement in the community and this seems as though it will be a wonderful way to do that. There are always poor among us who have needs, but we don't really do any kind of outreach programs. By partnering with these groups that are good at what they do, we can share what we do well. I hope the members catch the vision of what an impact they can have just by donating food on a regular basis.
Posted by Grandma Cantrell at 5:20 AM No comments:

Thinking of Jason on his birthday 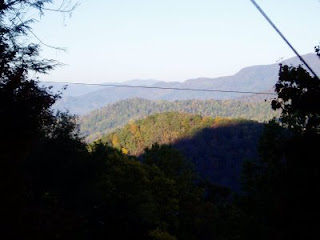 We just had a great extended weekend in Balsam, North Carolina, with Lisa, David, & Ashby. Tuesday was our last day and as Lisa and David took off, I felt overwhelmingly sad. I went and sat in the porch swing on the front porch, looking out over the beautiful mountains with the fall leaves in brilliant color. Bill walked over and sensed I was having one of "those moments." After letting him know that I was thinking of Jason, he sat with me. It would have been Jason's 31st birthday.

We talked about some of our best memories of him. Bill told of how proud he was of Jason the summer he worked on staff at Woodruff Boy Scout Camp. He had been late to be added to the staff and so was given the least favorite job at camp - cleaning the mess hall. Bill arrived a little early one Saturday to pick him up for a night at home and watched as Jason stood by the garbage and helped the younger scouts clean their plates. He smiled the whole time, giving attention to each scout as he came by. He worked hard, never "messing" around, and Bill's heart puffed up with pride as he watched him. Apparantly the adult staff noticed as well, as they soon gave him assignments with greater responsibility.

My memories tend to be more of when he was little. I remember holding him on my arm when he was just a year or so old. I can still remember the way his leg felt as I held him. He was always a skinny one and there was a certain feel to his legs. He stayed thin as he grew up, but was not scrawny. In fact, those legs became very muscular, making him a great runner.

We talked about many other memories, cried together, and laughed as we always do when we begin to talk about Jason stories. It will be ten years in November since we lost him, but he continues to fill our lives. We feel very blessed to have been chosen as parents for such a wonderful young man, who touched so many lives during his short 21 years.

We love and miss you, Jason!
Posted by Grandma Cantrell at 1:14 PM 1 comment: