With Ashby now 17 months old, we had the best Christmas ever!

We started with all the decorating right after Thanksgiving. Billy was still here, so he helped put lights up on the house. We all got together to decorate the tree before he left.

I had done a lot of shopping during the year, so much of my "shopping" was going through what I already had. I bought a few missing things online and made one stop at the mall to finish up. Oh, and of course, I had to go to the Dollar Store to find stocking stuffers. Other than groceries, that was about all there was to the shopping - nice and easy this year. Bill did pick up a couple of items, so that was also a help.

That left a little time for some fun things, so Lisa and I did a craft project. We made the nutcracker soldiers from clay pots that everyone has made over the last few years. It took us several days, since Ashby was so involved - one day for shopping, one for painting the base coat, two or three for the handpainting. And they turned out really cute! Now to figure out how to store them........

Billy drove down from Iowa a couple of days before Christmas. That was his third trip down in less than two months, but we were still so excited for him to come.

Christmas Eve is always with the extended family. This year we went to Julie's house. There was a nice group this year with all three of Bill's sisters, plus tons of nieces and nephews and all of their children. Ashby is the baby of the group and she had a ball. The traditional dinner is homemade tacos, which everyone loves. We often do a talent show, but this year it was very short. We then did a gag gift game which has also become a tradition. We finished up with opening the real gifts from the name draw. It was a lot of fun. We then went over to Lisa's for a little while, since Ashby was getting extremely tired. She was still so wound up, though, that it took a while for her to actually go to bed.

Leroy is the taco cook. He makes them using the recipe his mother taught him. 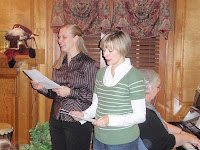 Lisa and Judy singing for the talent show. That's me making the mistakes on the piano! 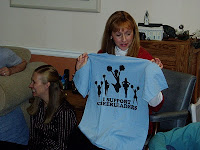 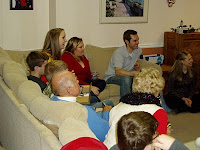 Some of the family enjoying being together.
Christmas Day, Lisa and David and Ashby came over late morning and we opened gifts. The rest of the day was just fun and relaxing. For dinner we grilled a London broil, veggie-kabobs, and shrimp. Mighty tasty!

Ashby wasn't much into the gift thing yet, but she loved all the activity. She was excited about every gift that was opened. She especially loved all the attention she got, both Christmas Eve and Christmas Day. I think she figures Christmas is all about her! She is definitely the most entertaining part of any day. 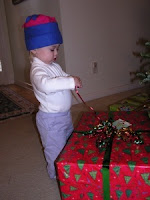 Even the bows are fun for Ashby. She loves that hat and wears it all the time! 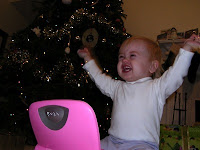 Uncle Billy got her her first laptop and she loved it! Everytime he got his own out, she came running, so he figured she was ready for her own. 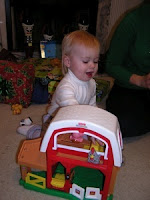 The Little People Farm from Grandma Vanett was really neat. 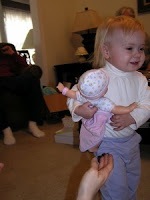 She loved her new baby doll from Grandma and Grandpa Cantrell.

Babysitting Ashby - For 5 Days This Time!

We had the best time taking care of Ashby for five days last week while David and Lisa were away. His company pays for an outing for employees and spouses at the Amelia Island (Florida) resort every year. No children are included, so someone had to take care of Ashby or Lisa would have had to stay home. We graciously sacrificed our time to take care of her. (Did you hear the chuckle as I wrote that? Some sacrifice!)

After stopping by the doctor's office to have him check out her fever and sniffles, they dropped her off on Wednesday. Turns out it was just a virus and not strep or flu, so they could leave her. Then our fun started! As usual, she was fun and cute and happy almost all the time, even not feeling up to par. I was most worried about her sleeping since she usually wants to be in her own bed, but we managed to do just fine. The crib is in the guest room, so one of us would just lie on the bed while she went to sleep. She never fussed at all about naps or nighttime. She woke up a couple of nights while she still had the fever and we gave her another dose of tylenol. Otherwise, she slept well.

It is interesting that a little 16 month old can get homesick, but I think she did. One of the sweetest stories happened while Bill was alone with her and I was at work. She was looking at the photo albums and got the one of the wedding. She was caught up in looking at pictures of mommy and daddy. She stopped at a picture of David, put her head almost on the page and just stared at him. Then she put her head the rest of the way down and started to cry. Poor Bill! He distracted her by putting on her favorite video and then hid the album so that wouldn't happen again. There were several other less dramatic moments when she was obviously missing mommy and daddy.

By Friday, she was feeling better and getting a little cabin fever. I was able to take off work, as did Bill, so we decided to go out. We made one errand stop and then went to the mall. She loves walking in the mall, watching all the people, especially all the babies. We went to the play area, but she didn't play long. She was really excited about the train, though. She knows the sign for train and kept making the sign and laughing. Bill was going to take her for a ride in it, but she almost cried when he tried to get her on the train. I guess she just likes watching it. She has ridden it before, but Lisa rode with her so that must have made the difference. We also walked over to the arcade where they have cars, buses, trains, airplanes, and whatever, that you can ride in. We didn't put any money in, so none of the vehicles did anything, but she loved going from one to the next and sitting in it and pushing all the buttons she could find. By then, we were all getting hungry, so we headed to the food court to get lunch. Because of her fever, she hadn't been eating too well, but by Friday, her appetite was back! She ate a ton of mashed potatoes, corn, chicken and anything else she could reach off our plates. She fell asleep on the drive home and then took a long nap. All that cute stuff - and we forgot to take a camera! Can you believe that?

After the first couple of days, she was really at home and acted like she ruled the place - which, of course, she did! When we decorated the tree, we made sure that breakables were on the upper part of the tree, so she could play with the things on the lower branches. She loves the tree and spent a lot of time taking things off and trying to put them back. She loves books and was always bringing a book for one of us to read to her. We have a coffee table book of Christmas pictures from around the USA. She loved looking at that and finding pictures of "babies." Her favorite picture is of four little babies - quads - all dressed up in Christmas outfits. Her absolute favorite thing was to stand in front of the open refrigerator and look at everything in there. She also liked to play in the office while I was at the computer. She discovered which doors and drawers she could open and would empty everything she could.

On Sunday afternoon, I heard a car door slam and looked out to see that Lisa and David were back. I got Ashby to head for the door and when Lisa opened it, Ashby went crazy! She was so excited to see mommy and daddy that she could hardly control herself. She bounced up and down, laughed, smiled, reached back and forth between them, and wouldn't let them put her down. So cute!

We had such a good time. Sunday night, after they went home, it seemed too quiet! We slept better - not having to half listen for Ashby - but it was lonely! I have said before that I have lived my whole life for this moment - and it is more true every day. I am so glad we live close enough that we get to do this kind of thing. I love being a grandma!!!!
Posted by Grandma Cantrell at 3:40 PM No comments: