Good friends are the best!!!

I have some great friends and all are important to me. However, there are three that fit into a special category. When we all started BYU in 1965, we were put together at random as roommates in Heritage Halls. We became the best of friends. Over the years, we kept in touch, sometimes off and on, but at least there was still a connection.

Well, a few years ago, we decided it was time for a reunion. So the four of us met in Las Vegas, where Margaret Ann lives. (We call her MA.) Even though we had not all been together in 40 years, it was like yesterday. We had so much fun, it was almost ridiculous. Who would have believed that four "mature" women could act so childish - and love every minute of it! 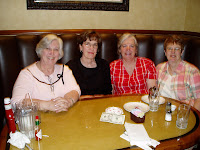 Rosi, MA, Connie, Joyce
Las Vegas 2005
In fact, we had such a good time, that we did it again in Utah, where Joyce lives. (We call her Joyous.) After a day in SLC and Provo, we spent the rest of our week at Joyce's cabin. You have never seen ridiculous until you see these four even more "mature" women riding on four-wheelers all over the mountains! 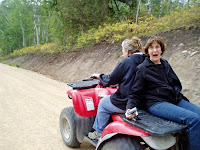 Connie and MA
Utah 2006
So, since that wasn't enough, we got together last spring in Piru, California, where Connie lives. (We call her Connetra.) Again, we had more fun than most people get in a lifetime! We left behind gnomes, which we each painted, around the tree we adopted and named "Roomie-toid," which just about says it all. Joyce added a wind chime, so poor Connie can never get away from us now! 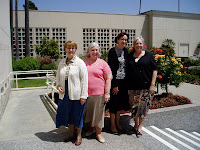 Joyce and her husband John are now on a mission in Russia and we anxiously await the weekly email telling us what they are doing. When they get home in 18 months, the roomies plan another reunion, this time in Atlanta. I am already planning what we are going to be doing - besides the silliness, of course.


So tonight I answered my phone, not expecting anything special and this voice says, "Hi, Rosi, this is MA." After I pulled myself out of shock, we chatted for a while. How wonderful to have friends who just think about you and then decide to call, just to say hi.


Thanks to all three of you for being the best friends ever - and for making it last a whole lifetime! Love you all.
Posted by Grandma Cantrell at 6:51 PM No comments: